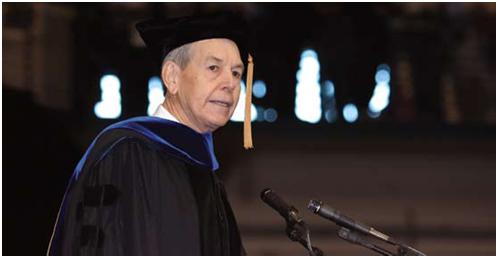 Dr. Jesse D. Jones is a Marshall County, KY., native and a 1964 graduate of Murray State University. After college, he went to work for the Ethyl Corporation in LA, later at the divided Ethyl and Albemarle corporations. For 32 years, Dr. Jones worked in Research and Development, co-authoring 19 patents. After retiring, Dr. Jones continues working as an investor.

Through his generosity, Dr. Jones ensured the completion of the clock tower on the new science campus, named after his late father Jesse L. Jones. Dr. Jones also provided funds for a satellite library named for his maternal grandmother. He has funded the creation of both the Racer Writing Center and the Racer Oral Communication Center in Waterfield Library. In addition to many other contributions, Dr. Jones has also created several outstanding awards and scholarships.